Bicycle Carousel Contributes to Bicycle Use in The Hague

In the Vruchtenbuurt neighborhood in The Hague, a fully automatic bicycle storage facility has been in place since 2019: the bicycle carousel. Decisio evaluated this innovative bicycle parking facility and advised the municipality on possible further roll-out. The evaluation showed that the operation of the bicycle carousel is satisfactory. Subscribers are satisfied and indicate they have started cycling more, while local residents feel the quality of public space has improved with the bicycle carousel. We concluded that in certain situations bicycle carousels are certainly an interesting solution.

Bicycle Problems in the Vruchtenbuurt

The Hague stimulates bicycle use in the city. In the strategy “Ruim baan voor de fiets” (“May Way for the Bike”) the municipality focuses, among other things, on high-quality bicycle parking and parking facilities. In this context, in 2017 it was found that there is a shortage of good bicycle parking spaces. Therefore, in the Vruchtenbuurt – one of the neighborhoods where the shortage is an issue – experiments have been made with a fully automatic storage system: ‘the bicycle carousel’. Commissioned by the municipality of The Hague, Decisio evaluated the carousel and made recommendations for possible further rollout in the city.

“Bicycles belong in public space just like cars. But bicycles obstructing passage on the sidewalk are irritating.” – Vruchtenbuurt Resident 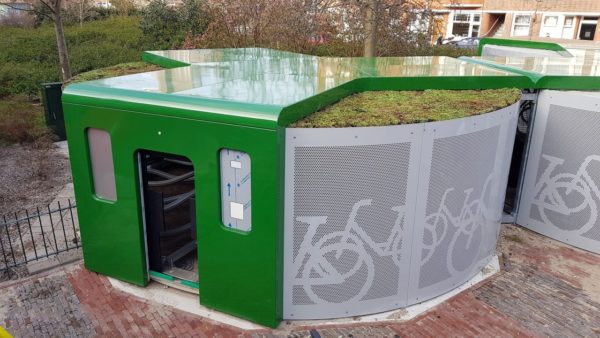 The bicycle carousel functions from the perspective of the operator, the season ticket holders and the local residents. The operator is satisfied due to the limited and decreasing number of reports of malfunctions, while season ticket holders appreciate in particular the short period of time it takes to park and retrieve their bicycles. Local residents are generally positive about the carousel as well. They see that the bicycle problem (temporary and local) has been reduced and feel the carousel is a quality improvement for the neighborhood.

“Messiness on the streets has decreased at the location of the carousels. In the surrounding streets, there is no noticeable difference.” – Vruchtenbuurt Resident

The waiting list for the bicycle carousel underscores its functionality. Almost half of the non-users surveyed are considering using the carousel as soon as a spot becomes available. They are also willing to pay: over 7 Euro per month on condition that the carousel is at most one minute walking distance. This is about 50 cents less than the willingness of current season ticket holders to pay. For both season ticket holders and non-users, willingness to pay decreases as the distance between home and carousel increases.

The evaluation further revealed that bicycle carousel leads to a change in mobility behaviour. Subscribers indicated they cycle more often and/or even purchased a new bicycle since the introduction of the bicycle carousel. Non-users, on the other hand, are not inclined to buy an e-bike or touring bike because of a good bicycle parking facility nearby, despite seeing advantages and being willing to pay for it. A clear modal shift from car to bicycle was not observed.

Finally, Decisio studied the conditions for placing bicycle carousels elsewhere in The Hague. A bicycle carousel functions in terms of policy and according to the people involved, but the investment costs are considerable and are not recouped during operation (even when fully utilised). This means that the bicycle carousel is only an interesting option if the neighbourhood meets a number of conditions, namely: (1) there must be a need for a closed bicycle parking facility, (2) public space is scarce, (3) no or limited suitable options for realising built-in neighbourhood parking facilities and (4) high population density.

The full report can be consulted here (in Dutch).