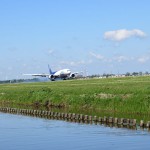 Schiphol-Airport is reaching in on its capacity limit. The strongly growing demand for air traffic is in contrast with the desire to contribute to sustainable development. Restriction of growth in air traffic (i.e. flights) is thereby necessary. Decisio and SEO have charted the effects of potential policy alternatives in an explorative Social Cost-Benefit Analysis (SCBA).

The policy alternatives provide insights in the possible directions. Alternatives range from a limitation of growth in the Dutch aviation, a further geographical regional spread of flights and the maximum utilization of runways and airspace capacity. The SCBA presents two prevailing effects. On one hand the positive effects of accessibility. And on the other hand the effects on the emission of CO². Pertaining to the positive accessibility effects, primarily the growth of Schiphol-Airport is determinant. More than 250 destinations can be reached from Schiphol-Airport. By ensuring that the growing demand for air traffic is accommodated. The Dutch tourist may easily undertake a long-distance journey for relatively low costs. By the same token, a foreign tourist can visit the Netherlands effortlessly.

Furthermore, the business climate for firms with many international relations is able to maintain its strong competitiveness on international accessibility. This is important for both business and private visits. All these advantages add up to the benefits of improved (international) accessibility. However, continuing to accommodate the demand for air traffic leads to considerable effects on the environment. And results in more and more nuisance for residents. Even though the latter effect is rather small in the SCBA (welfare for the Netherlands as a whole is the research area), concerns about the noise and air quality are serious issues locally. Issues such as a fair distribution of nuisance or its justification do not play a role in the SCBA, only the net increase of the nuisance.

Accommodation of Schiphol-Airport’s growth appears to yield more in terms of broad Dutch welfare than limitation of the growth. The trade-off between environment and climate on one hand,  and international accessibility on the other, remains the most important consideration. The net effect on the global CO²-emission is one of the most difficult to determine. Unclear is what happens to the flights that do not longer depart from Schiphol-Airport. Will these flights be substituted by flights departing from other airports? And, what are the other passengers going to do who do not longer travel via Schiphol-Airport? In order to take into account the CO²-effect and attribute it a visible place in the explorative SCBA, an assumption is made about the CO²-emission per flight to and from Schiphol-Airport: 50% of the total CO²-emmission of flight. Half of the emission is ascribed to Schiphol-Airport and the other half to a foreign airport.

In case it is decided to limit the capacity of the Dutch aviation, an additional taxation is a societal effective measure to take and has a higher contribution to Dutch welfare compared to capacity limitation alone. Capacity limitation leads to higher flight ticket prices as result of scarcity at Schiphol-Airport, but these higher prices are not beneficial to Dutch society. Instead, the (partly foreign) airliners reap the benefits. Through price incentives in the form of additional taxation, the flight tickets will reach the same price level for passengers. However, the Dutch government is going to benefit almost exclusively from the price premiums.

For more information about this project or what Decisio can do for you, get in touch with Niels Hoefsloot (n.hoefsloot[at]decisio.nl).