International City of Peace and Justice 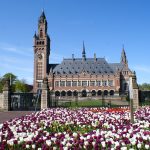 The report ‘Economic impact of international organisations, NGO’s, embassies, international schools and knowledge institutions’ published by Decisio can be downloaded here. More information about The Hague City of Peace and Justice can be found here.

For questions about the economic impact of international organisations in The Hague, you can contact Kees van Ommeren (c.vanommeren[at]decisio.nl) or call 020-6700562.