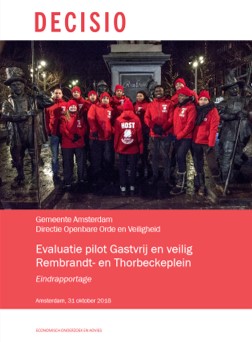 Towards a more welcoming and safer Rembrandtplein 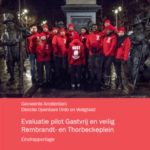 On the 1st of July 2015, the pilot ‘Gastvrij en veilig Rembrandt-en Thorbeckeplein’ started. Objectives of the pilot were more quality and less violence in nightlife, visitors feeling more welcome and safe and less nuisance for residents. The basis for the approach was a covenant between entrepreneurs, police and the municipality of Amsterdam. The approach contained four main measures. These were: hosts in the hospitality industry, training of hospitality personnel, a festival approach and a bonus/malus performance scheme.

Commissioned by the municipality of Amsterdam, Decisio has evaluated the pilot in the period April-October 2018. The evaluation is conducted by depth-interviews with entrepreneurs, municipality, police, hosts, community service officers, doormen, square managers and residents. Besides, the violence and nuisance figures are used on the basis of police registrations of the past ten years. Finally, also the outcomes of the annual surveys among local residents, visitors, entrepreneurs and doormen are incorporated in the evaluation as well.

Main conclusion of the pilot’s evaluation

The main measures as agreed upon in the covenant, are implemented in an active manner. All involved stakeholders are positive about the approach, the collaboration and the results. Repeatedly, the stakeholders emphasize that the key to success is in the entire package and set of measures. The hosts and the square lay-out form the primary pillars under the success of the pilot. The bonus/malus scheme and the training of the hospitality staff were less prominently visible, but also these measures contributed to the result.

Areas of concern for the future

Involved stakeholders are unanimous in their opinion that the approach must be continued in order to ensure more safety and hospitability on ‘Rembrandtplein’. There are still some points of concern, such as urinating in public, nuisance by taxies, reduction of alcohol consumption and commitment of the entrepreneurs. In addition, the lighting and branding of the building must be further organized. Besides, the demarcation of the district requires more attention, because of the litter from visitors and fast-food outlets in ‘Reguliersbreestraat’. To finalize, the plans for the underground bicycle storage with facilities and involvement of the municipal council is considered relevant for the follow-up approach.

For more information about this project or what Decisio can do for you, get in touch with Jaap Broer (j.broer[at]decisio.nl).