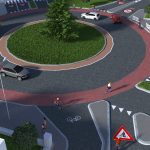 Collegno is a city of just over 50,000 inhabitants not far from Turin. In Collegno, three-quarters of the movements are made by car with serious negative consequences for the accessibility and the living environment. Solely 2 percent of the movements are completed by bicycle. The local government with the mayor as determined captain, is willing to change the situation with a brand-new bicycle plan. The municipality is keenly interested in the Dutch cycling culture and seeks ways to stimulate bicycle use in Collegno.

In this context, Decisio is being asked to set up BiCiPlan. Or in other words, a bicycle plan wherein several methods are outlined to enlarge the use of the bicycle in Collegno. In the plan, we have made a general analysis on mobility demand and supply in Collegno. Also, Collegno’s vision and ambitions are included in the plan. Furthermore, it contains a design of the potential cycling network and specific infrastructural and non-infrastructural measures which may be taken in order to get the inhabitants to cycle more. Collengo’s bicycle plan is established in close collaboration with local stakeholders by, among others, organizing workshops for city officials, companies and schools. BiCiPlan is received enthusiastically and is considered as one of the most extensive bicycle plans in Italy.

As well as on the local level, there is growing attention for cycling policies on the regional level. Commissioned by a few municipalities situated to the west of Turin (united in the regional organization Zona Ovest di Torino), Decisio got involved with a seven kilometers long cycling route called Servizio Ciclabile Metropolitano Linea 1 (i.e. SCM1). Part of the research is an exploration of potential demand, a design of the route and its spatial integration, followed by an examination of the societal effects it might generate. All of these research parts are in cooperation with the expertise of local specialists.

For various reasons, the SCM1 has been an innovative project. First, it was the first time the involved municipalities jointly worked on one project. Second, these kind of analyses are unusual for Italian bicycle projects. This has made the project an interesting and informative experience for all city official and administrators involved.

For more information about this project or what Decisio can do for you, get in touch with Paolo Ruffino (p.ruffino[at]decisio.nl).